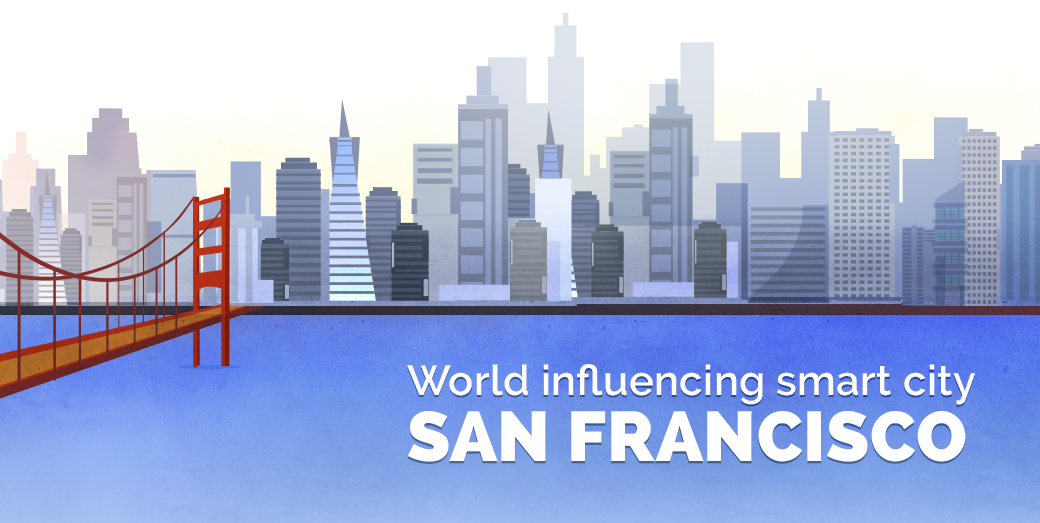 Smart City projects are shaping into reality all over the world. Some countries help their cities complete their process earlier than others with the support of infrastructure and smart technology, as it remains the driving force in all the smart city projects. As the USA has always been determined about modernism, many smart cities have developed, evolved and prospered in the country. A smart city is one that promotes sustainability and makes the lives of its residents easier. Comfort and safety are the major goals cities are trying to achieve for a long. But what defines a smart city? What are the parameters that guide cities?

One of the successful cities that have evolved over time with the help of technology in San Francisco. The city saw tremendous growth in infrastructure and population; this would mean unclean city, overcrowding and traffic. Taking the future into consideration, it was decided to modernize the city without major changes. They deployed IoT (internet of things) for a concealed systems that do not need manual labour. SanFrancisco has been a part of the international network for smart cities since 2011 and has been sharing best practices with sister cities including Barcelona and Paris. Smart technology is used to make the city’s building operations more efficient, reduce energy use, streamline waste management system, and expand transportation system, all measure that has contributed to greening the city while making mobility easier.

The San Francisco Smart City challenge flashed a vision throughout the world – Get the greenest, most affordable trip choice in 2 minutes and easily get anywhere in the city within 20 minutes. The goal was to complement current City goals. They achieved a Zero Waste and Zero Emissions aimed to attain by 2020. Vision Zero Traffic Fatalities by 2024 is still on the list. They have already reduced greenhouse gas emissions in 2017 by 25 percent since 1990. 50% non-driving mode share by 2018 in the transportation sector was met as latest as 2015.

The city is number one in venture capital investment, the first city to introduce ride-sharing and has the second most electrical charging vehicles in the USA. Thus San Francisco remains one of the most modern cities in the world full of smart cities. Such fast growth is needed in Indian cities. Overgrowth of population and hap-hazardous growth of infrastructure in the futile urge to solve all urban problems need urgent attendance.

India needs to follow the steps and work out solutions that would suit the Indian terrain. Smart city awareness has started swirling throughout the country, just the over-exhausted infrastructure has been a major hurdle. Affordable solutions have started to get distributed in major metro cities like Mumbai, Pune, and Chennai. Soon, more than a hundred cities will be declared as smart cities of India.

Masstrans provides better solutions to urban Indian problems. We aim at human safety and convenience. Smart city solutions like – speed control signs, smart waste collection, smart bus stops and many more have proved to work in favour of development; we look forward to helping Indian cities get smarter. We hope you are as excited as us for smart cities!